Visitors come to the Abbey Museum to learn about the history of our world. Our displays tell of the journey of humankind, while our events and public programs enable our patrons to make their own stories immersed in a curated experience.

Your donation supports the work we do for students, festival patrons, researchers and the general public. The funds you give enable us to develop and present creative and engaging programs, educational events and activities to students who visit our Museum to learn about the past.

You help us undertake vital conservation projects, to record, digitise, document and display all our collection objects and you also help us grow our collection through targeted acquisitions.

All your donations are sincerely appreciated and they make an amazing difference to what we can achieve together.

Thanks so much for considering my request. 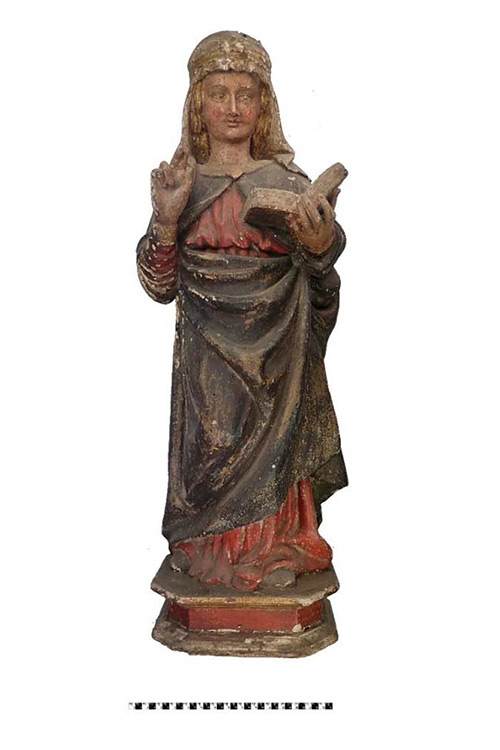 This figure is a rare late medieval polychrome wood sculpture.

It depicts a female saint, standing on a hexagonal pedestal, and holding an open book in one hand and the other hand raised in blessing. She wears a red robe with dark blue overdress, a white veil secured by a gold circlet and slippers.

She possibly represents St Ann, the mother of the Virgin Mary. However, there are a number of female saints, such as St Barbara, who carry a book as one of their attributes or she could also be a little known local saint.  Then again, the colour of her clothing is often associated with the Virgin Mary. It is possible this figure was originally from a group depicting Mary teaching the young Christ child.

The figure is wood with painted garments and gilt details. It is very rare to retain original paint on medieval sculptures. It is thought to be Central European (Austria or Germany) and possibly 16th century or earlier in date.

This object is in need of urgent conservation. There are structural concerns with major splits down the back of the figure that appear to have deepened since it was photographed in the early 1980s. Major paint loss has occurred on one side and on the robe over the arm; the veil and book. We are seeking to raise $5000 to undertake this conservation project.

Your support of the Abbey Museum’s Conservation Program would enable us to conserve this wonderful object for future generations to enjoy.

The Abbey Museum has a broad collecting policy, acquiring material that tells the human story worldwide. Our collection span over 500,000 years from prehistory to the 20th century,  providing insights into the technology, art, music, science, faith, and daily lives of an ever-changing society.  Each has a story to tell that informs our past and guides our future.  They are the foundations on which our world today is built.

Your support of the Abbey Museum will enable us to acquire objects to enhance our collection. Our current target acquisitions include musical instruments, costumes, early guns and medieval figurative objects. Also Viking and Greek artefacts, two cultures that are not well represented in the Museum collection.

In the Abbey Museum’s reserve collection are a number of rarely seen Old Master paintings, including a copy of Raphael’s ‘Bridgewater Madonna’, a Madonna and Child attributed to Carlo Marrata, an Adoration of the Shepherds after Gerrard Van Honthorst and a Crucifixion by Pierre-Paul Prud’hon.  Many of these were exhibited for several years at the Queensland Art Gallery. The reserve collection also includes important icons that date from the 15th century and a series of watercolours by the English School, including Birkett Foster and John Cotman.

Unfortunately due to a lack of space the Abbey Museum has not been able to display these wonderful works of art.  We have been raising funds towards this project. But progress has been slow with many demands on the Museum’s limited resources. 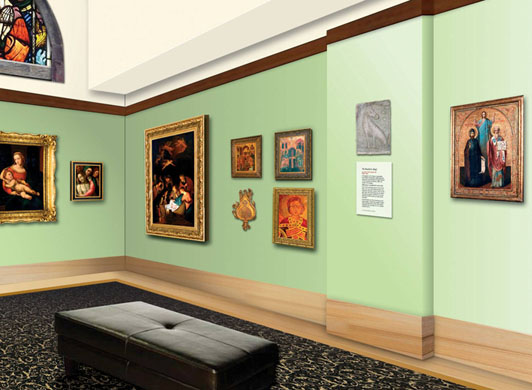 You can help bring this new Gallery to life! Please consider donating to this project so we can share our wonderful art collection with you and all our visitors.